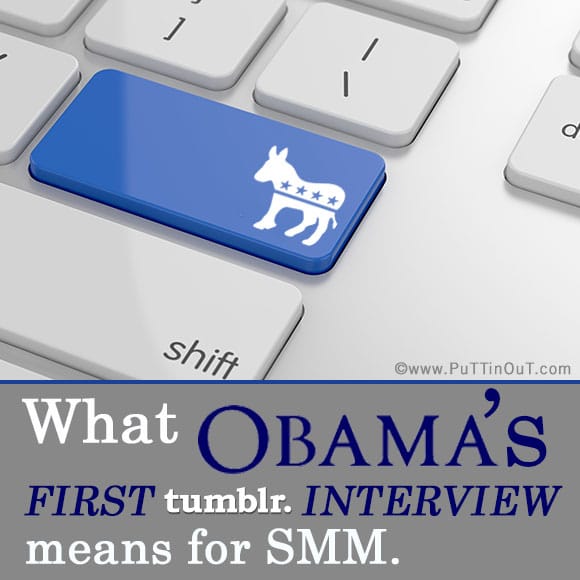 Did you get the .gif? If you think it’s new fancy term for peanut butter, think again. A .gif is a term for a short video clip set to repeat. Sound weird? Well, for lovers of Tumblr, the .gif is a big deal. I mean, even Obama’s doing it!
Obama interviewed with the illustriously young-looking CEO of Tumblr, David Karp, who was born in 1986 (I know, right? I feel so OLD!!!). Karp looked more like a high school student next to the President. But there he was, interviewing the leader of the free world.

Karp went from being a 17 year old web aficionado to the CEO of an illustrious social media platform that gained 75,000 users in the first two weeks. While Tumblr still doesn’t carry the same Klout as Facebook, Google+ and Twitter, it is posing some interesting questions. To the President, even!!! Here are five things Obama’s first interview on Tumblr means for the rest of social media marketing…and maybe even student loans!

1. You Don’t Know What You Think You Know

Guess who has one of the most savvy Tumblrs the other side of the Mississippi? The White House. They know how to brand and speak to a new audience and so should you.

2. Intellectuals Are on the Rise

While I’ll be the first to admit that Tumblr may not ever be for everybody and their Mom, the intellectual quality of microblogs and content on Tumblr begs a look. Tumblr is almost entirely your 20-somethings (or younger). College age.

Karp’s interview with Obama tackled, first of all, the rising student debt and Obama’s executive order to reduce this debt.

THIS is effective branding to an audience, ladies and gentlemen. Pure and simple.

Gone are the days where you can have a stellar Facebook and leave well enough alone. Your social presence is important on all social media. I’ve fleshed OuT the marketing potential of Twitter, Google+, Tumblr, and even smaller social media platforms.

It’s not rocket science, but it is social science. If you haven’t created your persona, you may find out someone else has (trust me, you should hear the stories I hear from CEOs upon discovering themselves on social media).

4. Political Agenda Has a Place in Social Media

Make no mistake. Polite conversation usually weeds out politics and religion, those age-old taboos. Not so on social media, especially Tumblr. This up-and-coming micro-blog touts heavy political and intellectual posts that, in turn, receive massive social engagement. While those comments aren’t always positive, receiving reaction is key to your social media marketing brand.

5. Social Media Has No Bias

Karp began at 17 to develop his ideas. By 21, Tumblr was receiving media attention. While we can’t all be the next Zuckerberg (maybe if I had a time machine), this reminds me that on social media, age and experience bias is less prevalent.

Did you know there’s a huge spike on Facebook for people over the age of 50? How about the growing number or 20-somethings finding new job opportunities in social media careers (ahem…my entire team here at PuTTin OuT)? These are BIG signs that there is a massive market for almost any audience (within age requirements of course), and if you play your cards right, you’ll speak to them all.

I believe there’s a formula for each social media platform. If you can find that sweet spot for your audience, you stand to gain more than just a few “followers” “connections” or “favorites.”

And for all you computer afficionados out there? Obama made it official: pronunciation of .gif is a hard “G,” so no more “.jif” Catch my .gif?

Dish it out, now. Are you on Tumblr? Do you believe politics belong in social media?