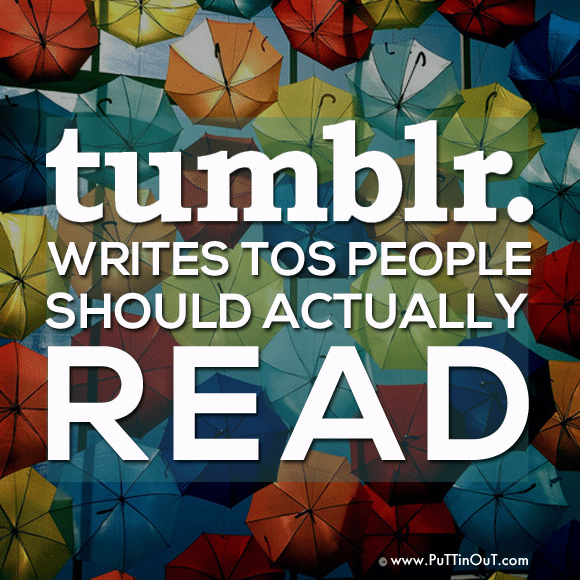 It’s the source of one of the most common lies on all of the internet (other than your birth year on Facebook 😉 – and it’s also one of the most boring, yet most important features of any legitimate online service out there.

People really don’t ever read Terms of Service, even when enrolling in something that ties in their bank accounts and personal information – which is scary (not that I read all of them word-for-word either!). The one exception to this might be Tumblr, whose TOS is funny enough you could read it over your cereal in the morning.

If you haven’t seen it yet (especially if you’ve actually AGREED to it!), then check out Tumblr’s funny Terms of Service update. I didn’t link the whole TOS there, since you’re probably only interested in the good stuff, anyway, but those are some of the top highlights from it.

That’s right, Tumblr’s official, legally binding law suit protection contract as designed by an actual big-shot attorney jokes about using drones to track your location, threatens to “narc on you,” and even insults you with a curse word if you are someone planning to violate the TOS. It’s good stuff!

Why This Is a GREAT Idea

Like I said, no one reads this stuff, and it’s frightening that we allow ourselves to be blindly legally bound to contracts that could say LITERALLY anything.

Every great relationship is built on two things: trust and respect. So, you want your users to trust you, and know that you respect them. Looking over the things Tumblr put into their TOS, you get the impression that they only want the best things for their users. That’s why they took the time to personally put things into simple, relatable terms.

Also, it’s great branding! Tumblr has a reputation for this kind of thing. They are edgy, young, fun, and don’t give a flip about expected protocol. And yet they are also professionals – very successful ones. This all just drives in those branding characteristics right in a way that appeals to their edgy, young demographics.

Should you do this with your TOS? Maybe not, but it’s definitely something to think about!!

And if you STILL aren’t on Tumblr, maybe it’ll change your mind to know how you can use Tumblr for SMM.

What do you think about Tumblr’s TOS? Which line is your favorite?