How to Fix Missed Schedule in WordPress 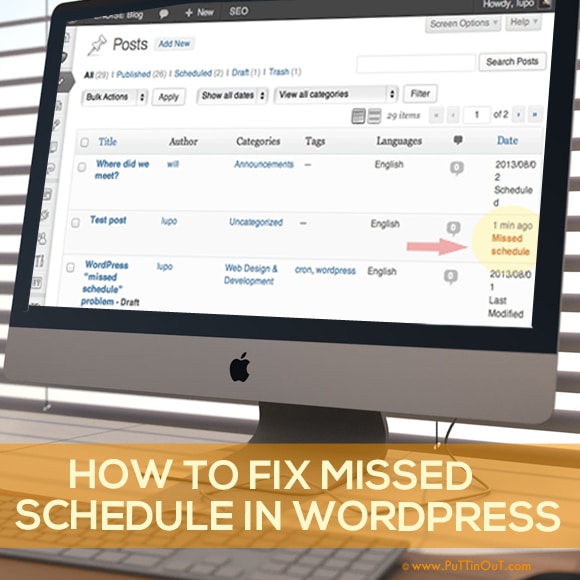 If you’re like us, you love WordPress. Blogging is super simple and organized, there are tons of cool capabilities and features, and there’s a plugin for just about anything you can think of.

But (yup, always a “but”!!) like all great technology, it still has its drawbacks. Nothing’s perfect, and if you’ve had the “Missed Schedule” problem with scheduled posts, you know WordPress fits that saying!

The first time it happens, you think, Darn! That’s weird!!

The second time, you think, Darn again!! This is still weird!

The third time you know it’s going to keep happening. So I looked into it.

Apparently the issue could be two things. This became a major issue with a certain version of WordPress (3.5). But it could run deeper than that. Apparently your servers might have some issues with WP Cron (WordPress’s use of chronological scheduling software), which I think was the case with us (things started going sour when we were shifting to a new, way better host).

There are a few ways to try and fix this, two of which are pretty simple.

First, try updating WordPress. Anything later than 3.5.0 might fix the issue on its own, as WP claimed they were working on it for 3.5.1. (At the time I’m writing this 3.9 is available, so you’d be waaay behind!)

If you have something newer than 3.5, the next fix might be downloading a plugin solution. The WordPress Missed Schedule Fix Failed Future Posts download doesn’t abide by the greatest standards of English, but it’s rated at 4.9/5 and has (presumably) fixed the problem for over 114k people.

Finally, if none of that works, it might be time to change hosts. Trust me – it’s worth it. And here’s my post on how to pick the best web host for your site based on my experiences.

There’s a much more temporary trick that might help if you’re getting the Missed Schedule error before the time of schedule. Some people have fixed it by scheduling a post, then going back for a “Quick Edit” from the Post page, then changing the schedule from there.

Things are back to normal for PO – did these solutions still not work for you? Did something else do the trick? Do share!!