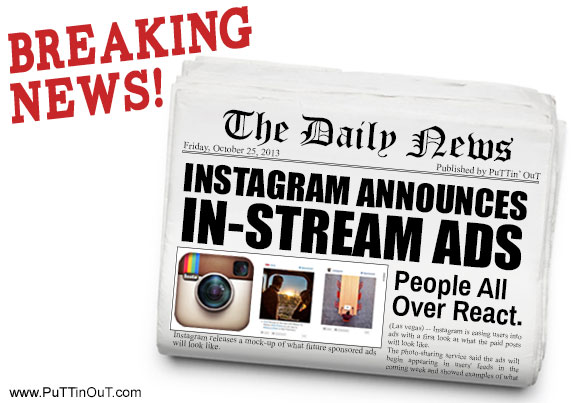 If you’re an active Instagram user – like the other 150 million users out there – you probably received a message from them in early October saying you’ll start seeing some sponsored ads in the near future (at least for the US users, who make up about 2/5 the total). Well, in case you thought/hoped they were lying or that it would just sort of not happen, it’s happening.

Instagram just released their first images showing what their ads for big wigs like Adidas, Macy’s, and GE will look like. And they look darn good.

It makes sense that the company now owned by Facebook would have a similar style of ad. Know how you started seeing sponsored posts right in your news feed and started wondering Huh, wonder which of my friends is posting about Norton Antivirus software…? Now that’s about to happen on your Instagram feed.

Once this starts going down, you’ll start seeing some striking images in your feed that look cool enough to be posted by your artsy friends, but the difference is these will probably show a brand and will be designed to make you click on them and buy something. All this only set apart by a tiny little “Sponsored” in the top right corner and the brand name logo in the left.

This is perfect for Levis, since their marketing has been all about being very vague and artistic. I’m sure more companies will start following suit for their Instagram campaigns.

This is happening in part because of the success of Facebook’s sponsored ads, which you’ve probably clicked on by accident (or at least noticed – which is more the point in advertising). But it’s also about using the smaller advertising pool (isn’t it great when 150 million people is a small advertising pool?) to test things out for the big guns.

The Good News for Us…

Well no one wants to be advertised to, but the powers that be have done the Hulu thing and are allowing us to at least control who controls our Instagram feeds. You’ll be able to say which ads you like and which you don’t so they can better target you and you can avoid seeing products you don’t care about.

On top of all that, the ads will at least look really cool. So at least you have that to look forward to 🙂

We want to know….what do you think of the new Instagram ads so far? Yay? Nay?

For more social media news and tips for super-powering your presence check out the rest of the Vegas Social Media blog!