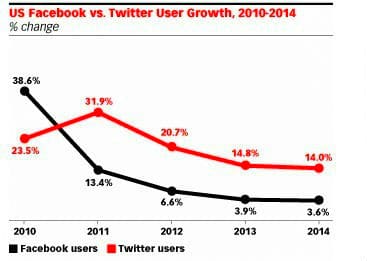 We all know Facebook is important in the networking world, with over 130 members in the United States alone.  But is it the fastest-growing social media site?

Not anymore.  According to Mashable, Twitter, which by comparison has only about 25 million active users in the US, is estimated to grow to twice it’s current size by the year 2014.

Facebook’s growth in the US will drop to single digits for the first time in the coming year, but Twitter followers will multiply by 20% or so, according to the research group EMarketer.

Of course Twitter isn’t the only social site that matters. Check out who’s really using Facebook and start hyper-targeting your efforts there!

How are you going to use Twitter to establish your brand? Are you already on Twitter? Let me know in the comments!