Social Media Crackdown: Time to Watch What You Post? 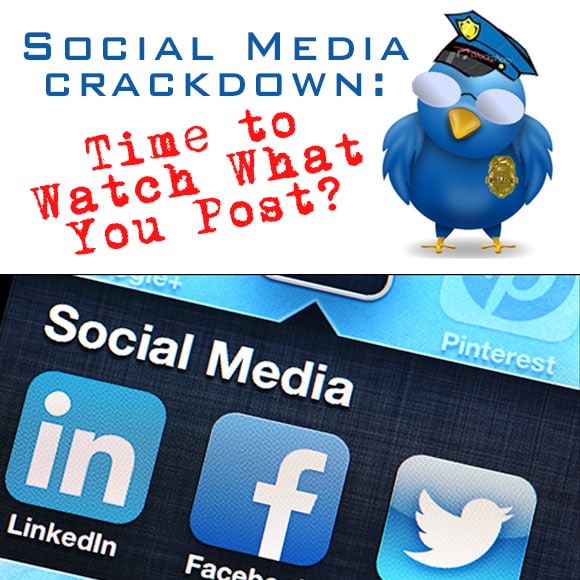 Bet you never thought that your use of social media could be helping fight crime… or that it could even get you banned from some services!

An article out today from Global Research states that nearly 96% of law enforcement agencies use social media in some capacity or other, including over 86% of which being “for investigative purposes.” Really? Investigative purposes? In other words, if you’re planning on robbing a bank, don’t Tweet about the Ronald Reagan mask and rubber handgun you just bought. I’ve seen some pretty wild Twitter marketing approaches, and while that might be an interesting one to try, I wouldn’t recommend it right now (small businesses: don’t forget why you really need Twitter!).

I guess we really should have seen this kind of stuff coming. Or that there would potentially end up being some government regulation on social media. According to that same article, apparently there have been some pushes to thwart potential protestors on social media, too.

Apple currently has a pending patent that would allow third-parties to “compromise a wireless device and change its functionality,” namely having to do with your IP address and web usage. And what could get unnamed powers-that-be to hop on to your smartphone and manually make changes to it? According to Apple, “certain events.” So yeah, avoid those events if this ever goes through!

Apparently all this is based around the government wanting to restrict people from using social media to “plan protests and other types of demonstrations,” which doesn’t seem to be as big a problem here in the States as it is in some countries, but hey, you never know. The thing that makes this really significant for us here is that this is phase one – if this goes through, there’s no telling what effects will come of it. Not that we don’t trust our government, just something to think about.

So while the government is starting to go sci-fi novel on our smartphones and social media use, you’ve still got nothing to fear when creating an event page for your upcoming violent protest. Hey, I’m not here to judge how you build your social media presence!

And for now, all our social media marketing efforts are still safe and sound, as long as they aren’t likely to involve the use of illegal public gatherings. So keep your social media community management campaigns clean, safe, and legal, and let’s remember the real best use of social media – getting your brand OuT there!

Bad idea? Safe idea? What do you think of all this?