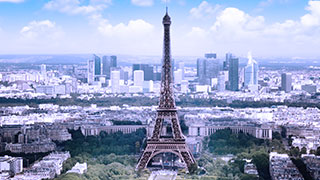 If there were a gold medal for the most savvy of all countries, France would win hands down. The French people with their sexy accents… and their cheese, oh the cheese!!!! But what about social media? Do they have the savvy they’re known for in the online ring?

I’d say yes. But they were “fashionably” late. Their internet penetration (a fancy term for how many people use the internet) sits nicely at 80 percent, one of the highest in Europe. In case you missed it, our trip around the world included the UK in recent posts. But WHAT are the French using? HOW are they using it? (Keep in mind we’re still talking about social media here…)

While they were late to the party, the French business world has their hands all over it now. Facebook and Twitter have growth and back traffic to international French companies and CEO’s across the globe. They’ve gone so far as to create their own business social media: Viadeo, which tops France’s list of most used, just behind Facebook and LinkedIn.

Viadeo is gaining clout in the business world and you may see a new blog on it soon. Yahoooo for new social media!!!!

While “uber” is a German word, somehow it has been used to describe the social media world… and the French? The “uber-connected” are users who are fully integrated into social media. They have access at work, they have smart phones, they can access it at home. France’s numbers show gradual increase to uber connection all over the country, prime real estate for social media marketing.

The issue of privacy and openness in social media is one big hot mess in France. The government has been known to actively discourage use of social media. They even went so far as to ban such words as “Facebook” and “Twitter” from television.

A law review passed in 2012 allowed employers to check backgrounds and fire people based on information found on social media.

Talk about your fixer upper.

If you know anything about SMM, you gotta know your demographic. If you’re pitching to the wrong plate, you’ll never get any hits (Cubs, anyone?!). France’s demographic is all across the board, so make sure you pay attention. Ready?

The younger generation dominates most social media networks. And I mean young (not to show my age here) but 18-24 is making a huge margin on analytics charts. Twitter especially has a younger demographic who sets their location in France.

Then there’s the over 55’s, who are also dominant on Twitter. I won’t act surprised. While Twitter isn’t everybody’s favorite bag, the 140-character Tweet played a huge part in French presidential elections, leaving social media a key player in politics in yet another country.

If you’re curious about social media demographics, I wrote about a new Facebook demographic that’ll either surprise you or has already annoyed you.

What trends do you see from France? What can we learn from younger demographic markets? Do tell.