Microvideo Marketing 101: Say It Through the GrapeVINE 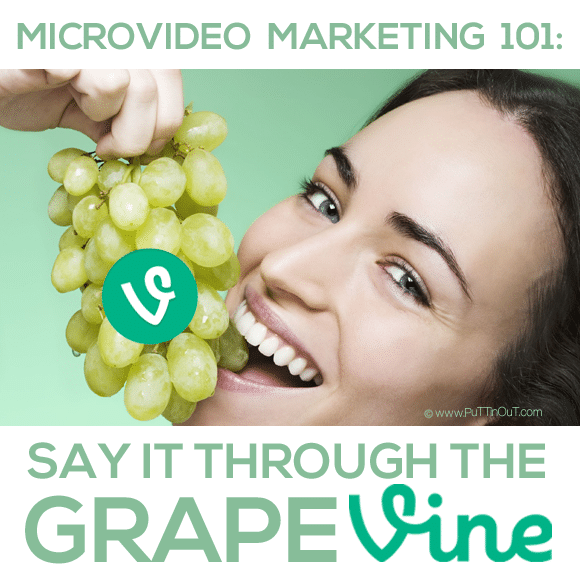 If you haven’t heard of Vine, I don’t know if I’d be surprised or not. Last year it was (at one point) the most popular free iOS app AND the most-used app for video sharing. And yet no one seems to be talking about it much, even though it’s owned and promoted by Twitter.

And considering the app just turned one year old, seems like prime time to show you what you’re missing OuT on!!

The Skinny on Vine

Twitter became the champion of quick-share social media a long time ago, so it’s no surprise they were the ones to buy the quick-share video company out. Think of Vine this way: Instagram is to Facebook what Vine is to Twitter.

Sure Instagram’s video editing capabilities are great, but there’s nothing like a 6.5-second video to get your creative juices pumping and to get right to the heart of your followers. That’s right, a 6.5-second looped video (with sound!) is what you get with this mobile app to say what you’re gunna say. Just hit the Record button and the in-app camera gets rolling. Then post straight to Twitter, and BAM – engagement!

Why You Should Vine It

Sure, you’ve got more than 6.5 seconds of stuff to say to your following, but the sad truth is that in our digital age, people don’t want to hear it all. This is too little time for anyone to lose interest in ANYTHING, trust me.

The best thing about Vine is that the quick-access, easy-share format invites sharing. People can watch your video and Re-Vine it in under 10 seconds. Where else can you go from market to market with organic sharing in 10 seconds flat?!

This is very similar to Tumblr’s microblogging format that people are going crazy over. And it works. So break down whatever your message is to the nitty-gritty of the nitty-gritty. You’ll be amazed at how freeing it is to be able to focus on just one brief message. Heck, even Dunkin Donuts did it, with the first-ever Vine TV commercial.

So check that out, see the Vine blog for some inspiration, and figure out what you REALLY want to say to your following. Make it funny, make it crazy, make it heart-warming, but above all, make it QUICK!! And you’re ready for Vine 😉

Got some Vine tips? Let me know how you use it for your social media marketing!