On and Off the Field: Germany’s Social Media 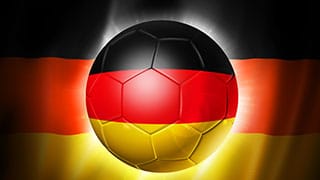 How’s your game? Not just the World Cup… but your social media game? If y’all haven’t heard, I’ll tell it to you straight. International social media is HUGE today. Your own backyard isn’t good enough anymore. So if you aren’t kickin’ it with the worldwide web, you aren’t reaching your audience.

To finish off our international social media month, let’s see what’s going down in Germany. In case you missed it, their contender Argentina got a juicy rundown just the other day.

While Germany killed it in the World Cup, they were late to the social media game, much like some other European countries. Check out the stats from socialbakers.com and note the staggered growth patterns not often seen today in social media.

Why this weird growth? It wasn’t something in the air. Or the water. Some people within European countries haven’t seen eye-to-eye with the new generation of social media. Especially on the invasion of internet privacy.

The young crowd, however, is carrying stats above and beyond the call of duty.

As you may have guessed, it’s the students and young adults becoming slick on social media these days. Their numbers to date have been highest in the 18-35 age group. Surprised? Probably not. If you know a thing or two about social media, you know the young ones are always at the gate first.

Facebook is the highest ranked, sitting at about 8o per cent penetration. Behind it are YouTube and local media outlets such as Xing, which is social media for business professionals, much like a LinkedIn.

YouTube, however is touted to have a possible 60 per cent rate of restricted data in Germany, popping up:

One social media lacks heavily in Germany’s IP address. Germany has a really slow growth pattern with the tweet. Some guess that it’s a language thing. The German language is known for its brevity. Its slow goin’ with Twitter’s 140 characters. It’s kinda like having 140 characters just to say good morning. Not very effective.

Just entering into the large SMM arena in 2012, they’ve been preoccupied with internet privacy and over sharing on the internet. To make matters worse, a popular student site, SchülerVZ, had a software hack in 2010 and gave a reported 1.6 million data sets of personal information to a hacker crawl. The response was ominous. SchülerVZ’s site (translated) says this now:

All pictures, posts, and information is reported deleted. Forever. I can only hope that Facebook doesn’t end up just like this. Yikes.